A meeting held by the Tablighi Jamaat at Markaz Nizamuddin has dominated the news cycle over the past couple of days, after a number of attendees tested positive for the novel coronavirus.

News reports have quoted central government officials as saying that 9,000 people—those who attended the meeting and their primary contacts—have been put in quarantine so far.

Over Wednesday and Thursday, as the number of active cases in the country saw a huge spike, many news channels raced to give the incident communal overtones, whipping up fear and hate against Muslims in the process.

While the Jamaat’s meeting, held over 9-13 March, has rightly been called irresponsible by a number of experts and commentators, the coverage by many media outlets has only served to increase stigma against those with COVID-19 and vilify people from the minority community. These tough questions were also not posed to other religious programmes held during or after the same period or the politicians who participated in them.

Television news channels have been especially vicious in coming up with derogatory and communal catchphrases, repeated ad nauseam, and even blaming the entire rise in India’s numbers on the meeting.

Shailaja Bajpai pointed out in The Print that while some anchors did try to adopt a more rational approach, important questions like the condition of migrant workers was almost forgotten in the din.

Here’s a look at some of the worst offenders.

ABP is one of the news channels that has gone to lengths to make bizarre remarks about the incident.

Playing on the word ‘markaz’ which means “centre”, the news channel debated whether India will reach stage 3 because of this particular jamaat and become the “epicentre”.

Zee News’s coverage of the incident can be described as terrifying—in one show, the news channel called the jamaat members ‘suicide bombers’, another video asked if they had betrayed the country. Yet another “exclusive” report connected the jamaat with Al Qaeda.

“This news report will make you wonder whether the job of the Tablighi Jamaat is religious activities or whether it is to help terrorist organisations,” the voice over, accompanied by dramatic music, said.

The sources of their information, said Zee News, was Wikileaks.

In a video, one of India TV’s anchors says, “God knows how many members of the jamaat are roaming around in the country like corona bombs”. The other anchor chimes in, “They can detonate the virus bomb at any moment, putting large numbers of people in danger.” All of this was also announced in high-pitched, dramatic tones aimed at spreading fear and panic in the minds of viewers.

The world “mastermind”, usually used for those who plan terror attacks, was used by Republic Bharat for the leader of the Tablighi Jamaat, Maulana Muhammad Saad Kandhlawi. Tickers on the news channel also said, “Tablighi Jamaat spread corona” as if it was the only source of the virus in the country.

Shehzad Poonawallah, anchor of the show ‘Right ya wrong’, has been using the hashtag #coronajihad to talk about the jamaat.

The channel also showed an unverified viral video of people sneezing allegedly during the markaz. ITV News India shared the video on its YouTube channel with the question “Did people in the markaz conspire to spread coronavirus?”

While the news channel said it could not independently verify the video, they kept repeating “this is what is being said on social media”.

Alt News has debunked these videos that were circulated online. 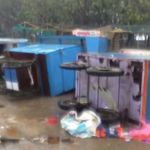