The Dallas Cowboys game Sunday featured a huh? moment that had nothing to do with the action on the field.

It was the sight of former US President George W. Bush and talk show host Ellen DeGeneres sitting next to each other that caught the attention of people watching the game on TV.

The two, attending the game with their wives Laura Bush and Portia de Rossi,  appeared convivial as they watched from Cowboy owner Jerry Jones’ suite. Bush “at one point after the national anthem got a big laugh from the comedian,” the Fort Worth Star-Telegram wrote.

Fans on Twitter were surprised, angry, amused or otherwise:

Laura & George Bush sitting with Ellen Degeneres and Portia de Rossi is not something I expected to see at an NFL game pic.twitter.com/AbWbhXd3RC

I would absolutely watch this sitcom though pic.twitter.com/3v3V5Xz01N

Fox NFL just showed a shot of George Bush and Ellen Degeneres sitting next to each other at the Cowboys game. Is my vision screwed up?

speaking of unhealthy parasocial relationships: why the fuck do any of you think ellen degeneres *wouldn’t* pal around with george bush

what about her public persona has ever given that indication https://t.co/W8FoaDsimj

— elseworld where the joker is from philadelphia (@lilpoolish) October 7, 2019

President George Bush @GeorgeWBush and Ellen Degeneres @TheEllenShow are sitting together at the Packers & Cowboys game.

This shouldn’t trigger you.

This should give you hope for our future. ✌🏽

If you told me George Bush would be sitting next to Ellen DeGeneres at a Cowboys game, I'd ask how long I've been in a coma.

It doesn't matter if you're gay or straight. Just untouchably rich.

And white, of course.

George Bush and Ellen DeGeneres are sitting next to each other at the Cowboys/Packers game. What is life?😂

Look at this dumbass #GeorgeBush yucking it up with Ellen DeGeneres at the #Cowboys game. Chummy with the Hillary commie-libs. No principle. #establishment#NeverTrumperpic.twitter.com/PdLWnGAAjB

Why The Coronavirus Mortality Rate Is Different From Place To Place

How Long Does Coronavirus Live In The Air? Here's What We Know. 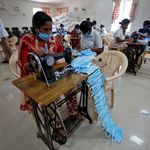 Govt To Decide On Reopening Schools And Colleges On 14 April

British PM Boris Johnson Admitted To Hospital Due To Coronavirus