The video appears to be a ‘sting operation’ and is published on a little known website www.tnn.world

HuffPost India has been unable to independently verify the authenticity of the videos screened by Sibal at his press conference.

The video, Sibal claimed, illustrated that this illicit currency exchange occurred at the behest of top government functionaries. This proved, Sibal said, that demonetisation was the “biggest scam in the history of Hindustan”.

Sibal called on the Enforcement Directorate and Central Bureau of Investigation to investigate the suggestions of wrongdoing in the video and to arrest those involved in the currency exchange.

Sibal’s press conference comes a day after the Income Tax department said it had detected a “widespread and well-organised” racket of collection of unaccounted cash of about Rs 281 crore during raids against close aides of Madhya Pradesh Chief Minister Kamal Nath and others. In response to the Press Conference in Delhi, according to a Press Trust of India report, Law Minister Ravi Shankar Prasad said in Patna that “Kapil Sibal has made false allegations on our (party) president (Amit Shah) and we will take legal action.”

HuffPost India spoke with Sibal after the press conference.

What is the information that you have gathered and what does it say about the ruling party?

His name is also given. Banks were involved, IndusInd Bank, the branch manager’s name is given. And other people were involved. This can’t be happening without the collaboration of people who were carrying the treasury notes.

The kind of commission that people took in the process was 16-40%. So for every transaction if you get 15-40% which is, part of it goes to the BJP, you can imagine the kind of money that these people made. Which is why it’s perhaps the biggest scam in the history of India.

This is just one field assistant. There are 26 others; 22 men and four women. Doing the same thing all over the country.

Who were these men and women?

I don’t know. If this is a field assistant to do this exchange appointed by the Government of India, who is a law officer, then it can’t be done by individuals who are strangers to the government. He himself is saying this.

What does this mean?

It was an enterprise to earn money for the BJP from exchange of currency.

Are you accusing BJP President Amit Shah of being involved in this?

I am not accusing anybody. This is what the tape says. If somebody says this and he is showing this on video, and the individuals are identified, bankers are identified, one transaction is happening in the Maharashtra Industrial Development Corporation’s godown. He says there are much larger godowns in Gujarat where all this is done. There are no CCTV cameras and anybody can do what anybody wants. And the other day when I showed it with other opposition leaders, what was happening in Gujarat was this wall of money of 2,000 rupee notes. How could it have happened without complicity? That has to be investigated. So FIR, arrest immediately, but they will not do it.

So what is your demand as an opposition politician?

I have already said so, if you have listened to my press conference.

But you are not individually accusing anyone of wrongdoing?

How can I individually accuse? I have no personal knowledge of it.

You are presenting this video after corroborating some information in it?

There’s a website which has all this. In the public domain. This can’t be enacted, right? This is not some act in a theatre.

But how can one believe the assertions made in the video?

It is my duty if something comes in the public domain to present it. It is my duty. It is the duty of any political party, right? To present it and tell the people of India what seems to be happening. And therefore somebody should take action.

Here’s my question: the very fact that you presented this in an open press conference means that you believe it to some extent, if not entirely―(interrupted)

It is my duty if something comes in the public domain to present it. It is my duty. It is the duty of any political party, right? To present it and tell the people of India what seems to be happening. And therefore somebody should take action.

And that somebody is the agencies. 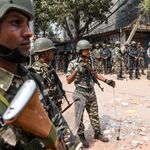