Gogoi said that he cannot hear the plea because he would be part of the committee meeting to select the next CBI director. The meeting is expected to take place on 24 January.

Rao was appointed the interim chief of the investigating agency after a selection panel-led by Prime Minister Narendra Modi removed Alok Verma as the director.

Rao’s appointment was challenged by NGO Common Cause. The petition states that the appointment of Rao was “not made on the basis of recommendations of the high-powered selection committee”, reported The Indian Express. 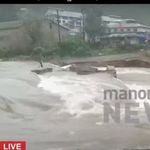