JAMUI, Bihar — Chirag Paswan, son and heir of Lok Janshakti Party’s (LJP) Ram Vilas Paswan, wants one thing to be clear: He is very, very pro-reservation, he is very, very upset by reports of atrocities against Dalits, but he is also very, very much a part of an alliance with the Bharatiya Janata Party (BJP), whose state governments have been accused of turning a blind eye to such atrocities in Gujarat and Uttar Pradesh.

In Maharashtra, where Chirag had a brief career as a film star that ultimately failed, the BJP-led state government has sought to associate Dalit assertion movements in Bhima Koregaon with the banned Communist Party of India (Maoist), while giving a free pass to those accused of attacking Dalit protestors.

But an election campaign is perhaps not the time to split hairs over ideology. It’s time to travel across Jamui where Chirag — young, tall, good-looking and the son of a politician who has sided with the winning party in Delhi in every election since 1989, except for a brief period when Narasimha Rao was prime minister — is seeking re-election in the upcoming Lok Sabha elections.

“When I came here I was a youngster but I want to stay here until I grow old,” he said during a quick stop for a selfie with star-struck students.

“The outcome of this seat is clear. Chirag will win hands down,” said Kishor Kesari, a shopkeeper in Jamui’s Maharajganj market who ran up to Chirag to garland him.

Manoj Pandey, a lawyer, explains the political and social arithmetic of this seat and how despite being a Dalit, the upper caste here would vote for him.

“Chirag will win easily. All the Savarna votes will go to him as he has BJP’s support. Dalits will naturally support him,” said Pandey. “Yadavs won’t vote for him, but a chunk of Muslims would come to him as the Paswans have smartly maintained a secular tag.”

Yet he faces a formidable opponent in Bhudeo Chaudhary who is running on a ticket from the Rashtriya Lok Samta Party that has the support of the grand opposition alliance that includes Lalu Prasad Yadav’s Rashtriya Janata Dal (RJD).

In interviews, it is apparent why Bollywood is — in many ways — a natural fit for the children of politicians: both industries seem well suited to unapologetic nepotism dressed up as a merit and hard work.

“Chirag is an elected MP so it won’t be fair to call his elevation as nepotism,” insisted Rajesh Vishwakarma, the general secretary of the LJP. “He first went to people, contested an election and won. The people of Bihar made him an elected leader first.”

Yet at times, the mask slips.

“Paswanji has made it clear that Chirag will take all the party decisions from now on and everyone in the LJP will follow our leader’s decision as his word is a bible to us,” said LJP’s Bihar unit vice president Ambika Prasad Binu, sounding not unlike a junior producer extolling the virtues of his boss.

In this election, the LJP is contesting six of Bihar’s 40 seats. Three of these six seats will be contested by Chirag and his two uncles — a fact Chirag accepts with a star-child’s faux-humility.

“I very humbly accept that. Yes, it is there. Three family members are contesting out of six seats,” Chirag told HuffPost India. “I don’t know how to deal with it when the public only demands that the family members should come and contest. And then there are charges of dynasty politics.”

At a time when other political parties in Bihar like the RJD and Nitish Kumar’s Janata Dal (United) are clearly witnessing internal struggle with the rise of Tejashwi Yadav and Prashant Kishore in the party hierarchy, the generational transition in the LJP was so smooth that it almost went unnoticed.

There are, of course, party workers who still hanker for the senior Paswan.

“Ram Vilas Paswan is extremely accessible. You can walk into his house or office and meet him directly,” said an LJP district president, speaking of Chirag’s father. “Chirag roams around in SUVs and stays in big hotels. He has also got this elitist outlook like a hero.”

But the party has largely come around to accepting Chirag.

“This generational shift is natural. A politician can’t be around all the time and Paswanji is also aging now. The way Rahul, Akhilesh, and Tejashwi took over, Chirag has also been declared our leader now,” Binu, the LJP’s vice president said.

“Even in businesses, a son takes over, the workers of that company start saying that the father was better, liberal and accessible. The younger one isn’t doing so,” Chirag conceded. “But the younger lot, which is connected to the young leadership thinks differently. Things have settled down to a great extent now.”

The LJP may be a small party, but it punches well above its weight with six MPs, and a minister each in the central government and the state governments of Bihar and Manipur. These successes are largely down to the senior Paswan’s political acuity which, Chirag’s supporters say, the son has inherited.

The decision to join the BJP, they claim, was Chirag’s idea.

“Chirag has groomed himself nicely. He doesn’t talk much but whenever he talks he talks sensibly. He grasps the subject well. He was the one who brought his father to the NDA fold,” said Dr Sunil Kumar, of the Janta Dal (United).

Now as the NDA’s tenure comes to a close, the senior Paswan was apparently reconsidering his support for the alliance but was convinced by Chirag once more.

“He takes swift decisions. There were times when even his father was hesitant about some things but this boy is confident as to what he wants to do and that has helped the party, said Daulat Rahi, an LJP general secretary. “He is a good speaker and politics is in his blood.”

The LJP’s leadership transition may have been smooth, but the party’s long-term prospects will be apparent only once the results come in on 23 May. 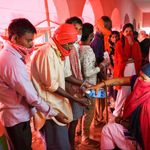