As Tanishq Withdraws Ad, Watch these 12 Heartwarming Ads and PSAs On India's Unity

Tanishq may have been forced to withdraw its campaign, but India has had a long tradition of video campaigns that highlight its unity in diversity.
13/10/2020 2:20 PM IST

A "cow dung chip", called Gausatva Kavach, was unveiled on Monday by the Rashtriya Kamdhenu Aayog, claiming it "significantly" reduces radiation.
13/10/2020 11:21 AM IST

Allahabad High Court On Hathras: 'What If Girl From Rich Family'

Lawyer Seema Kushwaha, who is representing the Dalit woman's family, said the court pulled up authorities over midnight cremation.
13/10/2020 10:06 AM IST

Power Restored In Parts Of Mumbai, Including Railways And Hospitals, After Massive Outage

Commuters were left stranded as train services on Western and Central line were suspended.
12/10/2020 11:42 AM IST

The family of the Dalit woman, who died last month, left from Hathras to Lucknow amid tight security on Monday morning, accompanied by SDM Anjali Gangwar.
12/10/2020 9:36 AM IST

‘It’s Ok To Feel Vulnerable, Weak’: Swastika Mukherjee On Her Mental Health Journey And Why She Talks Openly About It

The 'Dil Bechara' actor, who shared photos of her self-harm scars on social media last year, says we need to break the stigma and shame around having mental health concerns.
10/10/2020 8:08 AM IST

Modi Govt's Protocols On Covid-19 Have Been Dicey, IMA's Latest Missive Is Proof

The statement puts a spotlight again on the government's approach to the pandemic in India.
09/10/2020 2:01 PM IST

The actor highlighted the realities of caste discrimination by sharing how his family faced discrimination because his grandmother was from a backward caste.
09/10/2020 1:49 PM IST

The BJP youth wing is marching to 'Nabanna', the West Bengal state secretariat, to protest against the alleged 'deteriorating law and order situation' in the state.
08/10/2020 10:41 AM IST

TMC Says 'Poll Stunt' As Centre Calls For Meeting On Gorkhaland: 4 Points You Need To Know

While the ministers of the Mamata Banerjee government have called it a "conspiracy", even opposition parties in Bengal are unhappy.
06/10/2020 2:30 PM IST

The coronavirus pandemic and attendant worries are messing with our sleep, so we got experts to tell us how to make it better.
03/10/2020 7:56 AM IST

On Gandhi Jayanti, His Assassin Nathuram Godse's Name Is One Of The Top Trends On Twitter 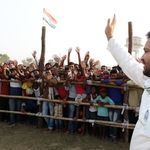