Andaleeb Wajid is a writer based in Bengaluru.

Writing By Hand Is Difficult As An Adult, But There's Still A Magic To It

Why The Humble Sehri Is My Favourite Part Of Ramzan

Maybe it was because of all the midnight feasts I had read about in Enid Blyton books, but as a child Sehri had become something fun, elusive and almost magical for me.
19/05/2019 1:07 PM IST

I Was Named After A Book And It Changed My Life

Himanjali Sankar's new book 'The Lies We Tell' offers a real look at the changing dynamics in relationships and how it affects not just the people involved, but also those around them.
24/02/2019 8:08 AM IST

In This Sri Lankan Sci-Fi Novel, Children Kill Each Other For Sport

Sri Lankan writer Yudhanjaya Wijeratne's sci-fi novel is set in a world where the British Empire never fell and the Commonwealth Flag still flies over the colonies.
12/02/2019 5:41 PM IST

The Burkha-Clad Woman And Her Red Maruti: How My Mother Embraced Freedom Through Driving

Whenever I see young a burkha-clad woman behind the wheel or on a scooter, their burkhas flying in the wind, I think of my mother, their reluctant predecessor, who took time to understand that freedom was all right.
13/01/2019 12:30 PM IST

Kashmir Then And Now: Paradise On Earth, 33 Years Later

The skies were grey, the mountains white, the chinar leaves had wrapped the trees in gold but the colour red had become anathema to Kashmiris.
15/12/2018 9:58 AM IST

The Elderly Have Many Stories To Tell. It’s Time We Paused To Listen

In the last few years of his life, my grandfather was often baffled by how fast the world around him was changing.
12/11/2018 6:24 PM IST

This tiny first floor room, away from the main school buildings, became the place where I began to love atmospheric settings.
28/10/2018 11:13 AM IST

Throwback SRK: Will Shah Rukh Khan Ever Bring Back Sunder From ‘Chamatkar’?

"Now I’m quite happy scaring others instead of getting scared myself, but I still watch horror shows only during the day."
14/10/2018 9:46 AM IST

In Small-Town India, Terraces Are Where Most Romances Bloom

There was something exciting, just about bordering on illicit, in writing about terrace romances.
07/10/2018 1:15 AM IST 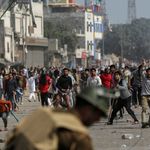