AHMEDABAD, Gujarat— Fifty thousand workers from Bihar and Uttar Pradesh fled Gujarat in the first week of October, after a migrant worker was accused of raping a baby girl in Sabarkantha district.

But their fear, workers confessed in recent interviews to HuffPost India, wasn't prompted by the immediate aftermath of the rape, but the memory of the Gujarat riots of 2002 — in which over 2,500 mostly Muslim residents of the state were killed as then Chief Minister Narendra Modi, and his state administration, failed to contain the violence.

"The migrant labourers were scared that there could be a repeat of the situation like 2002. It was this fear that drove them to their native states," Shyam Singh Thakur, President of Uttar Bhartiya Vikas Parishad in Gujarat, told HuffPost India. "The threats came from the Thakor Sena and thakor community people."

Thus, despite no reported deaths, production in workshops and small factories across the state has been disrupted, and the local economy has been hit in the run-up to the crucial festive season.

The migrant labourers were scared that there could be a repeat of the situation like 2002. It was this fear that drove them to their native states. The threats came from the Thakor Sena and thakor community people.Shyam Singh Thakur, President of Uttar Bhartiya Vikas Parishad, Gujarat

This October exodus suggests that the 2002 riots continue to haunt the state, despite the Gujarat government spending crores to rebrand the state as a safe, progressive, investment destination, and that the social and economic effects of the breakdown of law and order have significant long-term effects that linger well after the event has passed.

The fears of workers in Gujarat has significant national implications at a time when Prime Minister Modi, and senior members of his government like Finance Minister Arun Jaitley, insist India is an attractive investment destination for global capital, even as his own party president, and close confidante Amit Shah, routinely makes statements designed to vitiate social harmony.

A month after the exodus began, HuffPost India spoke migrant workers who stayed back in Gujarat, those who went home but returned a week later, and also some workers who are yet to return to Gujarat. Most asked for anonymity as they said they still feared reprisal attacks.

When asked what drove them away when no one was killed or even seriously wounded in these attacks, most workers told this reporter that they feared a repeat of the violence of the 2002 riots, except directed at them.

"We heard of some attacks in Sabarkantha and Mehsana district after the rape incident of September 28 but it did not make us think of leaving Gujarat," said a migrant labourer form Uttar Pradesh, who works in a factory in Chongadhar Industrial area on the outskirts of Ahmedabad city. "But on October 2, a group of ten people attacked a family and two migrant workers in our colony (on the outskirts of Ahmedabad)."

After this attack, the worker said, many of his colleagues received threatening Whatsapp messages and anonymous phone calls telling them to leave the state by October 6.

"We were told that there will be a rally of Thakors on October 6 in Chongadhar area after which they will teach us a lesson," said another labourer from this area, who stayed back after a team of policemen was deployed in the area after the attacks on October 2. "We were told that we should leave before that. More than half the residents our localities fled before October 6."

The threatening calls did not say exactly what the "lesson" would be; but given Gujarat's violent history, workers said, their thoughts immediately went to the riots.

Sabarkantha district, where the rape incident took place, has very few migrant labourers left now. The exodus from Sabarkantha took place allegedly after a program of Gujarat Kshatriya Thakor Sena in the district. Very few stayed back when the company owners assured them of security.

An owner of a crackers factory in Sabarkantha, where 15 migrant labourers from Bihar and Uttar Pradesh stayed after assurance of security from the owner, did not allow this reporter to speak to these migrant labourers fearing "it might scare them".

"Usually, the labourers get their monthly salary on 10th of every month. When the exodus was taking place, many didn't have money even to buy tickets. They requested their relatives from their native states to send them money but refused to stay back despite assurances of security from the police. Some of them even stayed at the railway stations for days when they could not get into crowded trains but they did not prefer to stay here," informed a labour contractor in Changodhar area who also hails Uttar Pradesh.

Until October 2, this contractor had employed around 150 Hindi speaking labourers in various companies in Chongadhar industrial area.

"Only 70 are left now. I used to get at least 10 requests for employment from my state every day. Since October 2, only three people have inquired about it," he said.

Tribhuvan Singh, from the Ahmedabad chapter of the Uttar Bhartiya Vikas Parishad, an organisation that works for the welfare of North Indians in Gujarat, said such was the fear that people left their belongings and fled with whatever they could lay their hands on.

"There was a campaign 'Bhaiyyaji Bhagao, Gujarat Bachao' by Thakor Sena. We were getting a sense that everything was pre-planned," Singh told the HuffPost India.

Gaurang Jani, a professor of Sociology at Gujarat university said Gujarat had witnessed riots at regular intervals since 1960, a separate state was declared. The first riot occurred in 1969, followed by a violent students agitation in 1974, anti-reservation protests against Dalits and Adivasis in 1981, against other backward classes in 1985, followed by communal riots in 1992 and 2002.

"Gujarat has a history of intolerance against the SC-ST communities, outsider workers and of course the Muslims," Prof. Jani said. "Interestingly, no government, whether it's a Congress government or the BJP government, tried to address this issue and create a sense of security for everyone. It was these migrant workers who created the wealth of Gujarati industry but they could never become a part of the state's society."

Gujarat BJP spokesperson Bharat Pandya, however, disagrees with this analysis.

"Gujarat is a symbol of peace, unity and development. Gujarat is a small mirror image of India. The people of Gujarat will never allow anything like that to happen. Gujarati people are spread across the globe, so we can never think of something like that," Pandya said and blamed the Congress party for spreading terror and threats through social media leading to the exodus.

However, Gujarat Congress spokesperson Manish Doshi alleged that the government failed to protect the children and then the migrant labourers.

"The BJP stands for a theory of mob lynching. It's their ideology. To spread fear, confusion and hatred is their recipe to achieve power. They use it in various ways, at times on religious lines, at times using language or regional sentiments to distract people's attention from the real issue," Doshi claimed.

Interestingly the Gujarat government, in an affidavit filed in the Gujarat high court in response to a PIL filed by social activist and lawyer Khemchand Koshti on this issue earlier this month, stated that these "workers have gone to their native places for various reasons like Durga Puja festival, Chathh Puja Festival and other social, religious and family reasons".

Congress MLA Alpesh Thakur, who was blamed for making provocative statements and whose organisation Gujarat Kshatriya Thakor Sena was accused of being involved in attacks on migrants, also denied any role in it.

"Who was attacked? No one was injured. Since the very first day, we have been taking everyone along. We have been trying to create a peaceful atmosphere here. Even after the rape incident, we repeatedly appealed for peace," the Radhanpur MLA told HuffPost India.

A migrant labourer from Uttar Pradesh, who runs a social welfare group in Hindi speaking areas of Ahmedabad said, " What if our people had retaliated the attacks? Imagine what would have happened. The migrant labourers come here to work and they are not bothered about anything else. How can you blame an entire community for the crime of one person? What if we do the same with Gujarati people in our states? Don't forget that the people of Uttar Pradesh have accepted a Gujarati, won him a Lok Sabha election and made him the Prime Minister of this country." 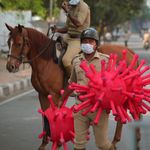