Two emperor penguins in Antarctica have waddled their way into the international spotlight thanks to an unintentional video “selfie.”

The inquisitive creatures were captured on film investigating a camera left behind by the Australian Antarctic expeditioner Eddie Gault at the Auster Rookery.

“It didn’t take long for the naturally curious birds to seize the opportunity for a selfie,” the Australian Antarctic Division wrote in a Facebook post about the video.

In the brief footage, one particularly nosy bird walks over to the camera and kicks it so that the lens faces up, giving humans a view of the animals typically reserved for the birds’ prey, the Antarctic silverfish.

Another penguin shuffles into view soon after. Both animals spend some time peeking at the lens over their long beaks before their attention drifts away.

The video was captured near Australia’s Mawson station, one of the oldest continuously operating bases in Antarctica.

The video, not technically a “selfie” since the camera was rolling before the birds commenced their inquiry, captured the interest of thousands online. The Australian Antarctic Division posted the video to its social media channels Wednesday, calling it a “penguin selfie.” It has accumulated more than 132,000 Facebook views and more than 6,000 retweets.

The two stars are already rare birds ― but rapidly warming air and sea temperatures may make them even rarer. Climate change threatens to make their habitats inhospitable, and some scientists predict the birds’ population may diminish drastically by the year 2100.

How The Kerala Elephant Death Got Communalised Thanks To Maneka Gandhi

People Are Really Pissed With Arvind Kejriwal Over Corona App. Here's Why 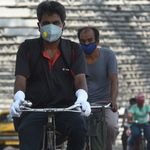 These Are Govt's Guidelines For Offices, Restaurants, Malls, Religious Places