A bandage on his right hand, Chandrashekhar Azad, the elusive founder of the Bhim Army, a reactionary group behind the Dalit violence in Saharanpur, surfaced at a heavily-attended protest event at Jantar Mantar on Sunday, and promised to surrender to the police.

The 31-year-old lawyer is named in one of the 24 FIRs registered by UP Police for allegedly orchestrating violent protests in Saharanpur on May 11, a week after the Thakur community allegedly burnt down houses in Shabbirpur village following complaints by Dalits over loud music played during celebrations of Maharana Pratap Jayanti. Chandrashekhar, the leader of a group of educated youths committed to fighting atrocities against Dalits, was evading arrests since May 10.

An audio message that surfaced recently on social media, directed his followers to attend the 21 May rally.

"Meri kaum jaag uthi hai (my community has woken up)," the activist said at Jantar Mantar yesterday, as a loud cheer went up across a sea of protestors.

The Yuva Shakti Dal, including the Bhim Army, were denied permission by the Delhi Police to stage protests against alleged atrocities against Dalits in UP.

However, Uttar Pradesh Chief Minister Yogi Adityanath said at a function yesterday that criminal elements, who had a free run over the last 15 years, were trying to create "mischief" in the state.

"Yeh desh hamara hai, aur is desh ko hum tootne nahin denge (this is our country and we will not let anyone divide it)," Chandrashekhar said.

A Dalit protestor in Jantar Mantar has something to say: pic.twitter.com/tmFmt01PFa

Protestors, wearing blue Nehru caps and holding up huge posters of Ambedkar, cheered Chandrashekhar on as he appealed to the audience to prepare for the long battle ahead. The protestors were joined by members of the All India Students Association (AISA), student wing of the Communist Party of India (Marxist-Leninist), IANS reported.

Telegraph reported that vandals damaged an Ambedkar statue in Saharanpur over the weekend. "Targeting the statue was just one instance of the Thakurs' intolerance. Their real intention is to frighten us into leaving our villages after selling our properties to them at throwaway prices," Mahendra Pradhan, a Dalit, told the paper in Mirzapur village of Saharanpur district. 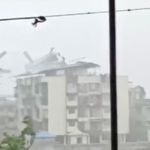