Barred by four private airlines after he assaulted an Air India staffer on Thursday, Shiv Sena MP Ravindra Gaikwad has now had to take a train back to Mumbai.

Gaikwad, who had pulled rank on the Air India staffer, and beaten him up with chappals and bragged about it to media people was snubbed by Jet Airways, IndiGo, SpiceJet and GoAir which is part of the Federation of Indian Airlines. IndiGo even cancelled his tickets that were booked for today from New Delhi to Pune.

An FIR was also registered against him by the Delhi police.

While Gaikwad proudly told the media, "Maine sandal se pachhis maara, (I rained 25 blows on him with my slipper)," he was criticised by politicians and netizens alike.

People on Twitter also made fun of the MP.

@ndtv he shd not be allowed in train. No public transport. First learn manners how to behave

@ndtv hope he behaves with the TTE in the train. Or else if they ban him from traveling then his only option left will be bus.

The video of the assault showed a stewardess as saying, "You're a role model no? Parliament kaun pahuch sakta hai? Aap jail mein kyu jaana chahte hai? You are a democratic leader, we have elected you. Aap fenk denge toh murder case ho jayega na, sir? (Why do you want to go to jail? If you throw him out it will be a murder case)."

To which his answer was, "Hone do na, bahut cases hai hamare upar."

IANS reports that the incident happened when flight AI852 from Pune landed in New Delhi on Thursday. He was nursing a grouse that he was made to travel economy when he had a ticket for the business class. He refused to deboard and was causing trouble for other passengers.

Perhaps, on his train journey, the defiant MP can retrospect on why an apology is must. 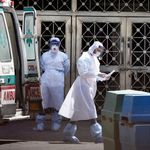