I ended my day 1 diary piece with the hope that Saturday would be a much better day at the movies, and it was.

Seeking to avoid the long queues at the festival’s suburban venues, I chose to watch my first two films at PVR Phoenix in Lower Parel. The day began with Lenny Abrahamson’s much-acclaimed Room, which won the People’s Choice Award at Toronto in September and has already generated some serious Oscar buzz.

Based on Emma Donoghue’s best-selling novel, Room is a twisted, modern-day fairy-tale of a mother (Brie Larson), Joy, and her five-year-old son Jack (Jacob Tremblay) who have been held captive by a sexual predator for seven years. The two live in a tiny garden shed — a dank, messy dwelling with just about enough roo—sorry, space, for a kitchen, a bathroom and a television — in which little Jack has been brought up to believe that ‘Room’ is the entire world and the tiny bit of sky that can be seen through their skylight is outer space.

For much of the first act, I resisted the film’s central conceit. How, in modern-day America, could this even happen? How has Joy managed to raise an apparently healthy child all by herself in a tiny room without him ever seeing daylight? How has she not been able to seriously maim her captor (they have knives in there, after all) and intimidate him into typing in the security code that opens the only door to the room?

However, boosted by strong performances by Larson and an incredible Tremblay, the film really grew on me as it progressed. By the end of the film, I was completely hooked. Yes, Room is manipulative, but in a good way — it’s the kind of movie that gently coaxes you into believing what it has to say instead of forcing its agenda.

Next up was Abhay Kumar’s documentary Placebo, which has been doing the rounds of international film festivals for over a year. A look at the lives of students living in the depressing hostel rooms of Delhi’s All India Institute Of Medical Sciences (AIIMS), which sees one or two suicides a year due to its hyper-competitive and isolative nature. Placebo begins well, but completely loses its way in the second act, devolving into a loose documentation of student life, peppered with somewhat pretentious psycho-babble and decently-executed-but-tedious animated sequences.

Placebo - Trailer from CAT&Docs on Vimeo.

Precious screen-time is wasted on capturing the shenanigans of 20-year-olds being 20-year-olds (smoking joints, juvenile one-upmanship, rocking out to Black Sabbath etc) and by the time the film got to what it really wanted to say, it had almost lost me. Even so, I would recommend this film to those looking to watch interesting documentaries from India, largely for the sincerity with which it has clearly been made.

I had a booking to watch the Italian film Sworn Virgin but chose instead to beat the insanity of rush hour by travelling back to Juhu for Raam Reddy’s Thithi, a Kannada feature that won two top awards at Locarno earlier this year.

The screening was packed to the gills with a number of special guests (master filmmaker Adoor Gopalakrishnan was spotted in the audience, along with sound designer Resul Pookutty and actor Rana Dagubatti). The hype was palpable, and I’m happy to report that it was worth it. Thithi is a delight, featuring a wonderful ensemble of non-professional actors that transports you into an Asterixian village in Karnataka. After a crabby old man named Century Gowda dies at 101, the villagers plan an elaborate send-off, sparking off a series of events involving his descendants.

Reddy, making his feature debut here, emerges as one of the most exciting new talents in Indian cinema right now. His direction is rock-solid and honest, while Ere Gowda, the film’s writer (who hails from the village depicted) develops beautiful and highly memorable characters. Thithi is light-hearted and has an infectious spring in its step, and would’ve been a sure-shot winner under the India Gold section had it not been part of the International Competition instead.

'Trump Or No Trump, This Is My Space', Says Resident Of Slum Hidden Behind Wall In Ahmedabad

As Modi Fawns, Trump Is Quietly Killing Off A Major Trade Deal

What American Media Said Ahead Of Donald Trump's India Visit

Trump And Modi Want A Lot From His India Visit. They Won’t Get It All 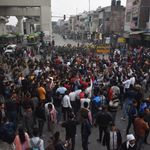 From Donald Trump's Signature To Sabarmati Ashram Visit, The Best Memes On Twitter

We Have 10 Years Left To Save The World, Says Climate Expert: 'Humanity Is At Stake'