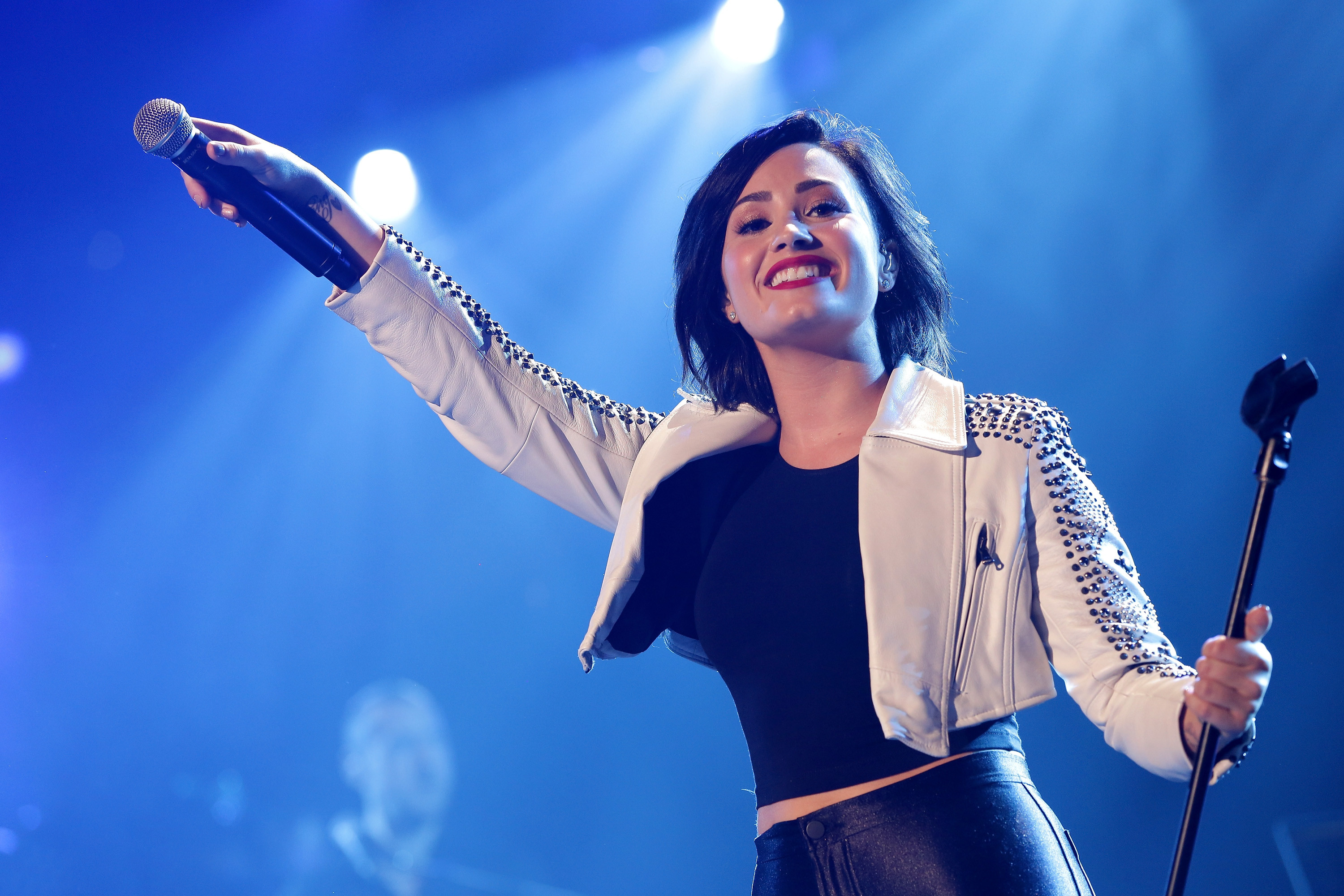 If there's one thing singer-songwriter Demi Lovato knows how to do, it's express her emotions on stage, detailing her trials and triumphs with mental illness through her lyrics. But in her downtime, she's also a vocal advocate for mental health awareness and acceptance, speaking publicly about her experience with bipolar disorder and addiction.

"I want to use my voice in more ways than just singing."

Now, she's taking her advocacy one step further. The singer recently launched Be Vocal, a campaign to encourage individuals struggling with mental illness to talk about what they're going through. The project is a partnership with well-regarded mental health organizations like The Jed Foundation and the National Alliance on Mental Illness, who have long been involved in other anti-stigma initiatives.

The Huffington Post sat down with Lovato to talk about the new project and what she wants everyone to understand about mental health.

The Huffington Post: What originally drew you to the Be Vocal project?

Demi Lovato: I thought it was incredible that the top five mental health organizations have all come together to make this happen. What attracted me to this campaign was this was an opportunity that I could do a PSA. I could make sure [the message about mental health] gets out there. With the resources Be Vocal has, it's really going to make a difference.

Yeah, I feel like a lot of mental health isn't really discussed in the way that it should be.

It's not. But people want it; people crave it. People are wanting to talk about it and learn more about it because things are coming up in the news. What Be Vocal does is that it gives more to information to people. It's important that people are vocal about mental illness and that they speak up for their community as well as themselves.

Can you talk to me a little bit about your own journey with mental illness? Why did you decide to speak publicly about it?

Speaking out about my mental illness was really difficult in the beginning because I kind of didn't have a choice. Unfortunately, when you're in the public eye, everyone knows your secrets whether you like it or not. I had an opportunity where I could say, "Yes, I went to treatment but I'm not going to talk about it," but I felt like I could make a difference. I thought it was my responsibility and my purpose to speak about the things I believe in and what I was going through, because I want to use my voice in more ways than just singing.

So grateful for these two men who also helped make this happen.. Thank you for continually taking care of me as an artist but most importantly a person. Who supports not only my music but sobriety and who were there at my party to celebrate my first year sober. That meant so much to me.. Thank you Ken Bunt and Mio Vukovic. Love you both 💗 #hollywood #island #safehouserecords

What do you personally wish people understood more about mental health?

There are several things. With addiction, there are times that people think "Well why doesn't this person just stop drinking?" or "Why doesn't this person just eat something?" for people who have eating disorders. It's not that simple. If it were, so many people wouldn't be struggling with it. Lives wouldn't be lost. I wish that people could understand that the brain is the most important organ in your body. Just because you can't see it like you could see a broken bone doesn't mean it's not as detrimental and devastating to a family or an individual.

That's something a lot of people don't realize. We've actually talked a lot about what would happen if people started treating physical illness like mental illness.

Let's talk a little about mental illness stigma. How can those experiencing mental health issues fight against those stereotypes?

What advice do you have for teens or young adults who may be experiencing anxiety or any other mental health issue when they're in school?

I can't stress enough to vocalize your needs to a great support system -- whether it's your family or even an online community of people who are going through the same thing that you are. It's so important to vocalize what you're dealing with instead of internalizing it and letting it manifest into unhealthy behavior. That eventually leads to lifelong problems. That's the most important thing you can do.

Exercising is another way I deal with anxiety. Painting, and writing music and expressing myself through art are other ways that I can release emotions. Meditation is another one. Whatever it is, it's important to find what works for you. 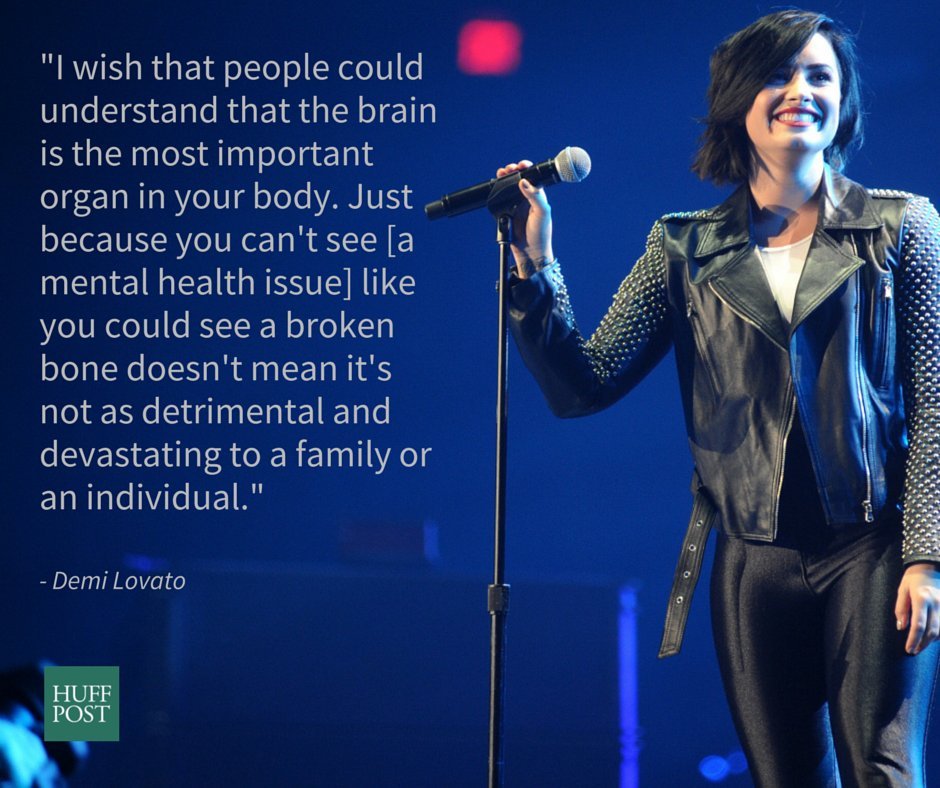 We've done a lot of posts for Stronger Together [HuffPost's mental health initiative] on what these disorders actually feel like. For you, how would you describe how anxiety physically feels?

I've actually had anxiety to the point where I've felt drugged. I actually ended up having problems with my thyroid because I was so stressed out and so anxious at times in my life. I remember one time I actually went to the hospital because I physically felt like I had been drugged; I was having an anxiety attack.

On a day-to-day basis if I get anxiety, I just need to take a couple deep breaths because sometimes I feel like I can't catch my breath. Sometimes I'll get very shaky and very scattered. You know restless leg syndrome? It's like restless body syndrome.

That's so scary. When you're feeling that way, who is the first person you call when you need support?

The first call I make is my boyfriend [Wilmer Valderrama].

He calms you down?

Absolutely. He calms me down and makes me feel so much better. But having people who are professionals as well and not relying on just one person is another key to maintaining a healthy recovery. I talk to my therapist. I'm actually in AA, so I reach out to my sponsor. I talk to the people around me, like the people on my team. I vocalize a lot of what I need and they're very understanding. I'm very grateful for that.

This interview has been edited and condensed.