New Delhi: Prime Minister Narendra Modi will address a rally in west Delhi's Dwarka on Sunday, as part of the Bharatiya Janata Party's (BJP) ongoing election campaign in the city.

BJP president Amit Shah will also reportedly hold three rallies in different parts of the city, while Congress president Sonia Gandhi is going to address a rally at Meethapur Chowk in Badarpur today.

The BJP has stepped up its poll campaign ahead of the crucial Delhi assembly polls, with Prime Minister Modi on Saturday urging the city electorate to vote for those who would serve them better rather than 'backstabbers'.

The Prime Minister is also scheduled to hold rallies in Rohini on February 3 and Ambedkar Nagar on February 4.

The BJP has scheduled around 250 rallies in the next six days.

The Aam Aadmi Party (AAP), too, is pulling out all stops in a bid to counter the BJP and will reportedly hold 25 public meetings in the national capital today.

The elections for 70-member Delhi Assembly will take place on February 7 while the results will be announced on February 10. 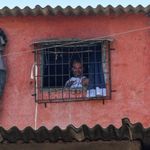